Did the mayor of Miami Beach just show that global warming is manageable?

Hey, parking meters are hard, but here’s Miami Beach Mayor Philip Levine declaring “victory” in the “first battle” against rising seas. His sword in this fight is a $400+ million infrastructure project that has prevented flooding in one of the lowest spots in Miami:

This is a victory for the first battle in what will be a long war against sea level rise. @MiamiHerald @joeflech pic.twitter.com/UQa6gJlmbJ

Why yes, it is remarkable that when you replace your city’s old and decaying drains with a new system, flooding can be managed.

And we missed this when looking at the photograph the first time.

Ha! Solar panels will fix everything. (Check back with us when the first tropical storm blows through, however. Coconuts and solar panels don’t mix.)

However, not everyone is as convinced as the mayor at his “victory”:

.@MayorLevine @MikeGrunwald @MiamiHerald @joeflech So, the problem has been fixed for one year. What's the plan for the next 50 or 100?

This area of Miami Beach was featured prominently in the New York Times earlier this year, with Al Gore chiming in:

With this good advice from a reader:

@algore then stop building on flood plains you idiots ! #globalwarming is a lie ! WE ARE COOLING ! And we are fracing at 15000 ft , u loose!

EXACTLY! In Miami, the core of the problem is actually politicians who allow the building of structures in areas that they say will flood. For example, this new science museum in Miami Beach is being built in a global-warming flood zone literally feet away from Biscayne Bay: 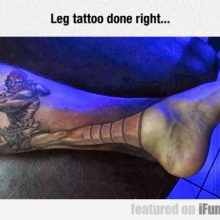